Social Media and Your Neck 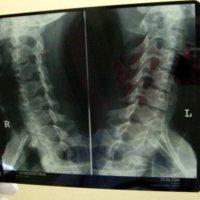 A decade ago the way backpacks were worn by younger people in the ACT was one of the most significant postural concerns for me as a Canberra chiropractor. Although it is now far from perfect (they are still generally too low and too heavy), their use is better now than it was.

Today, the new postural concern has to do with social media usage, which appears to be increasing every year. All age groups are affected, but younger people spend the most time texting and online. It has been estimated that young people spend two to four hours a day with their heads tilted forward reading and texting on smart phones and other devices to access social media.

My concern, as a chiropractor, is the way accessing social media requires moving the head forward and the effect this has on the neck. A recent study [1] measured the weight of the head in a neutral position, and in increments as the head position moved forward. A human head weighs 4.5kg – 5.5kg in the neutral position, but as the head bends forward, the weight on the neck increases dramatically, as we can see here:

Looking at these figures, heavy social media users complaining of neck and shoulder pain and headaches is predictable. The time young people spend accessing social media equates to an extra 700 – 1400 hours a year of extra stress on the neck. As a Canberra chiropractor, this is of significant concern to me, as it should also be to all social media users and parents.

It is extremely unlikely that this situation will improve, so it is important that the neck be as healthy and as structurally sound as possible in order to cope with this increased load as well as it can. A key strategy for optimising neck structure and function for ACT residents entails regular visits to a Canberra chiropractor.