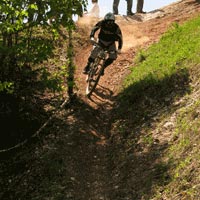 Momentum is the term that deals with the physical property of matter in motion, or the impetus of a course of events. You will often hear the term used when you are watching team sports. It is truly one of the inexplicable aspects of sport, and one reason team sports enjoy so much popularity throughout the world: a team that has been losing for most of the game can suddenly become unstoppable in their pursuit of victory because they have gained momentum.

There is also a certain momentum to health. Most people build up a momentum as young people. If they are active, eat nutritious foods and are taken good care of by their parents during their formative years, they build a certain health momentum that can keep them going for years, even if they begin to neglect aspects of their health as they get older. But if they continue down this pathway, often, quite suddenly, it will become apparent that the momentum has swung in the opposite direction. Once the momentum of ill-health takes over, it can be difficult to reverse it, especially as we age.

In chiropractic, we define this downward momentum as ‘limitations of matter’. The body simply does not have enough resources to turn things around. There is too much permanent damage to the tissues of the body. This limitation emphasises the need for chiropractic care (among other health behaviours) on a regular basis in order to maintain your health momentum.